It seems everyone is ready for the change of season, most especially boaters. There are many topics to think about as we get ready for warmer weather. In this blog we will discuss some of the more important ones. First let’s talk about gasoline. Fuel distributers will be shifting over to summer blend fuel and stopping delivery of winter blend. For those boaters that have older fuel sitting in their tanks keep in mind that winter blend fuel was formulated for colder temps, running this fuel out as temperatures climb can cause problems. Most of today’s newer more sophisticated engines have ECU’s or ECM’s (electronic control modules/units) that read data fed to them constantly and adjust to try and perform to those inputs. Poor fuel can cause many costly problems and even ruin your engine. Today we must use additives to try and combat the adverse affects on our marine engines. Stop by and we will be glad to discuss the benefits of these products. Products like Ring Free Plus, Internal Engine Cleaner, PRI-G fuel stabilizer, K-100 Fuel Conditioner, Sta-Bil- Honda fuel stabilizer and many more.

Be prepared, as most of our customers are, they understand the importance of preventative maintenance. Most have learned the off-season is the best time to schedule service and any needed repairs. This avoids downtime during the spring/summer season. If you did not winterize – call to schedule service checkups sooner rather than later. The longer you wait the busier we may be. Many customers are already scheduling dewinterizing and bottom painting. 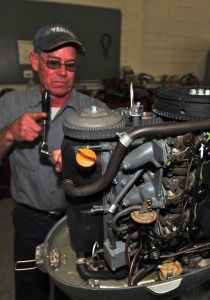 Some important items to keep in mind: water pumps and thermostats are critical to the life of your engine – especially in a saltwater environment. Thermostats should be inspected and/or replaced annually especially in a four stroke. According to most manufacturers today water pumps should be serviced every two to three years (especially in a salt water environment) not just for the components that make up the water pump but also to make sure everything comes apart as it should. We have seen many instances where the lower gear case will not want to separate or the driveshaft key way will not come out due to lack of service. Keeping up with recommended service saves you money in the long run. Also remember simple items like your battery(s). Be sure they are maintained properly and kept charged. If they are suspect, let us load test them for you and make sure they are safe. If you need replacements – remember we stock Interstate Batteries which are fully charged and delivered on a bi-weekly schedule. Speaking of safety – always keep these items on your check list: steering systems – whether mechanical or hydraulic, controls, shift and throttle cables, all fuel and oil hoses, all filters, propeller(s) and don’t forget the trailer. Remember in most cases a trailer equipped with brakes must be inspected annually – in Virginia 3000# gross and over is required to have brakes and therefore needs inspection.

On the sales front we have been busy with new boat orders and customer re-powers. New inventory has been arriving with more to come. Much of this inventory is pre-sold but stock items will be arriving mid-March. For those still looking for that perfect boat or motor please contact us soon. We look forward to seeing all of you for the upcoming season!

For many this time of the year is time to winterize and secure the boat until spring. The term winterize is a very general term and can mean many different things depending on the product being considered. For example winterizing an inboard/outboard is different from winterizing an outboard engine and an inboard/outboard that is fresh water cooled is different from one that is raw water cooled. So first learn and understand exactly what you have.

If you are planning to do your own work make sure you know your product. Consult your owners manual, many are now available for download if you do not have a hard copy. If you are unsure, do yourself a favor and take your boat to a reputable service dealer and have it taken care of properly. Some basics to consider: 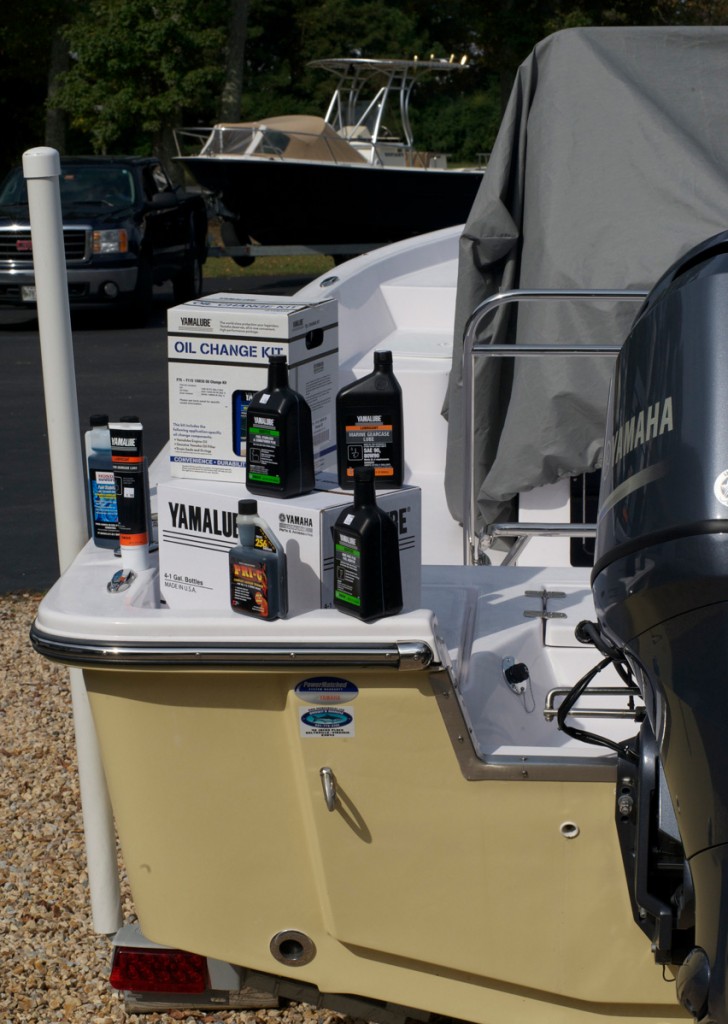 Protection from freezing- anywhere water can collect is obviously a problem, use common sense –drain freshwater tanks or protect with proper antifreeze, check all compartments and make sure they can drain, when the boat is hauled and blocked or on the trailer remove the drain plug from the boat.

Protect your engine – Inboard/Outboards will freeze, if yours is freshwater cooled make sure the antifreeze is at proper strength, a raw water engine should be flushed and protected with antifreeze or at minimum drained of any water. Outboards should be stored vertically if possible as water will drain from the power head.

Don’t forget your fuel system! We see more fuel related problems than any other issue. Most manufactures today recommend removing fuel from the tank if possible. Even with stabilizer today’s fuels do not have a great shelf life, this is especially true when the fuel sits in small areas like a carburetor. In this environment: small volume, exposure to air and temperature variation fuel will break down rapidly.

We stock winterizing products from Yamaha, Honda, BRP, Suzuki and many aftermarket suppliers. Stop in as many items are on special for the do it yourselfer. Items like Yamaha Ring Free, Yamaha Fogging Oil, Combustion Chamber Cleaner, all Yamalube products both 4M and 2M even Yamaha oil change kits. Bulk Yamalube, just bring in your container and save! We stock Honda fuel stabilizer- one quart treats 320 gallons of fuel- an excellent solution to the problems created by ethanol. Other fuel stabilizers like PRI-G and K-100. BG fuel products like 44K. Gear case lube from Yamaha, BRP, Honda and Mercury, even gearlube pumps for the do-it yourselfer.

Hope to see you in the store!

Fuel efficiency, lack of noise and vibration, a strong charging system, power and speed all add up to the perfect boat and motor combination.

When it comes to boat ownership, it’s really all about having the right package for what you want to do. The more your boat, engines and all the components work together, the more effectively you can fish and operate, and the better performance and fuel economy you’ll get. Essentially, that all equates to happiness.

I was just at the Yamaha V6 F300 Demo Tour in Seabrook, Texas, and that was one of the things we were emphasizing—having everything working together to optimize performance for your style of fishing. And from the start, let me state that the Yamaha F300’s really are the best outboards on the market when it comes to performance, providing a broader performance band of midrange fuel efficiency and power than any other outboard on the market.

hen combined with OEM partners. When you combine three F300’s with my boat—a 36’ Yellowfin, it really is the optimum package for performance, speed, reliability, efficiency and fuel economy. And when you combine that with my type of fishing, which is very versatile where I’m fishing for Spanish mackerel on the beach one day, snook fishing in the inlet another and running 200 miles to chase tournament fish on another, you get the best fuel economy, so essentially the best of both worlds.

We need and expect a lot from out boat and motor, and this package has it all. When Spanish mackerel fishing, we need maneuverability so we can turn quickly in a pack of boats or to avoid an approaching wave on the beach that might break at any time. When we’re snook fishing the engines are running and keeping us in place in a moving tide and we need those engines to be super quiet, with no noise when we’re constantly shifting in and out of gear to hold position in a strong current.

That’s where the combination of the motors and the SDS (Shift Dampener System) props come together to create the perfect package for what we want to do. There’s no sound whatsoever when you put the engines in and out of gear, so you don’t spook the fish and shut the bite down.

Then there are the days when we’re a mile offshore catching Sardines and a 50-pound king comes through. I’ll have the “Oh My God There’s A 50-pound King In The Bait School” rod ready to go, and we just put a bait on and toss it back, and that can make your day right there. Here I am in a 12,000 pound, 900 horsepower boat having a full-day charter on less than 15 gallons of fuel.

When I run my normal charters out of Jupiter, Florida, I’m running less than 30 miles in any direction and averaging 1.2 or 1.3 miles per gallon, which is pretty impressive for a 36’ boat. 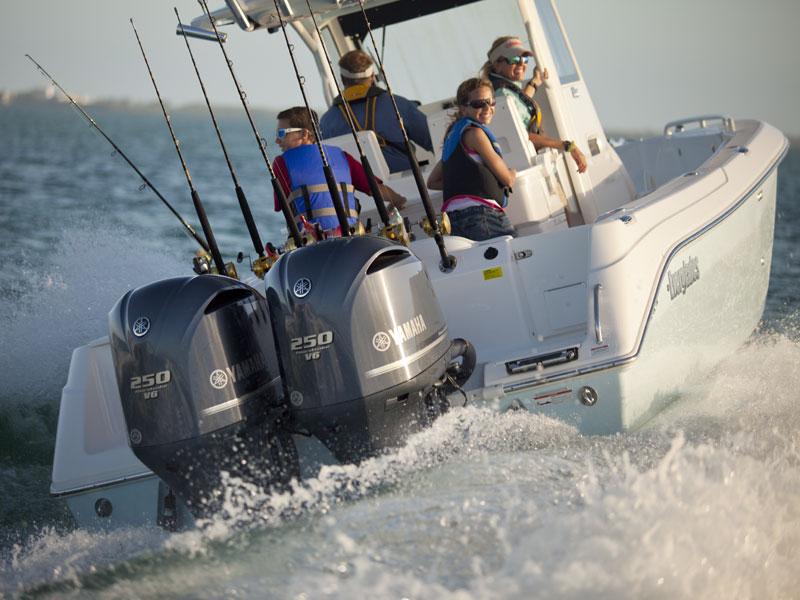 The beauty incredible midrange fuel efficiency of the F300’s is exhibited in the springtime when we’re doing a lot of run and gun dolphin fishing. It sounds like you run fast all over the place, but we really don’t. My boat gets on plane at 23mph, and that’s what we run. We run for no more than five minutes, then we shut down and scan the horizon 360 degrees with binoculars looking for floating objects that might hold dolphin. If we don’t see anything, we run for five minutes more, and then stop and look again. And we don’t run in the same direction, we zig-zag our course to cover the most water possible. The key to that is that at 23 mph or just on plane, I can get 1.5 miles per gallon.

When you have that kind of fuel economy, it’s actually cheaper for me to run the boat to some of the nearby tournaments than to trailer it. There’s a big tournament coming up at Hillsborough Inlet in a couple of weeks and I’ll probably put the boat in locally and run the 36 miles down instead of trailering it down.

So not only am I being cost efficient and fuel efficient, but I’m being fish smart too. I can zig-zag from 60 feet out to 300 feet of water and see what the conditions are and compare that information with what I know about the bite to get the most current fishing update I can have.

We did a little daytime swordfishing about 18 miles east of the inlet last week for something different. We made six drops, had four bites and caught two fish. Doing something like that is when the charging systems on these engines comes into play.

We have two electric reels going, plus all our electronics, radar, sounder, bait pumps, and everything else going. We also put up our kits and put a big bait out, because you never know when that big dolphin is going to swim by, and we use electric reels on the kites. So we have all this power drain at once, and that’s where you realize that the charging system is better than it’s ever been on these motors, something like 29% better than any other V6 outboard on the market.

I’ve never had an issue where I’m tripping breakers or with a low battery. These motors require very little power at idle. They’re just very efficient.

The same goes when we transition to the evening swordfishing where we’re out there at night. We use strong lights to light up the fishing area, all the electronics and radar. They’re always on watch for us, and yet we have plenty of power to keep thing going all night long.

So whether I’m fishing the inlets, the beaches, running and gunning, swordfishing or tournament fishing, I have the perfect boat and motor combination, along with all the other components to the system to give me the best chance to catch fish with optimum performance and incredible fuel economy. How many boat/motor manufacturers can make that statement?